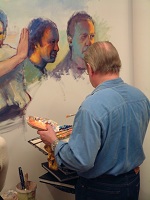 Internationally renowned Welsh artist John Allinson's latest production is a painting celebrating a viewpoint of entertainment as an art form. it was conceived to prelude Europe's newest and largest picture studio development. The 1000 feet canvas painting will set a new world record. A copy will be erected and seen from the M4 motorway near Cardiff. A celebration of a record of achievement. Guinness world records will be asked to authenticate the record.

A 30 minute broadcast quality documentary is being produced for commercial television to promote the painting, its investors, partners, government agencies, producers, directors and sponsors.

A sequel is currently being planned to announce Dragon International Studios and Leisure Attractions Wales. Designed as a compliment to the United Kingdoms movie industry. The promoters of the £500 million complex are currently casting many local and international companies for partnerships, service providers, and suppliers as well as for sponsorship.